Remodeling Horror Stories – Don’t Let it Happen to You! 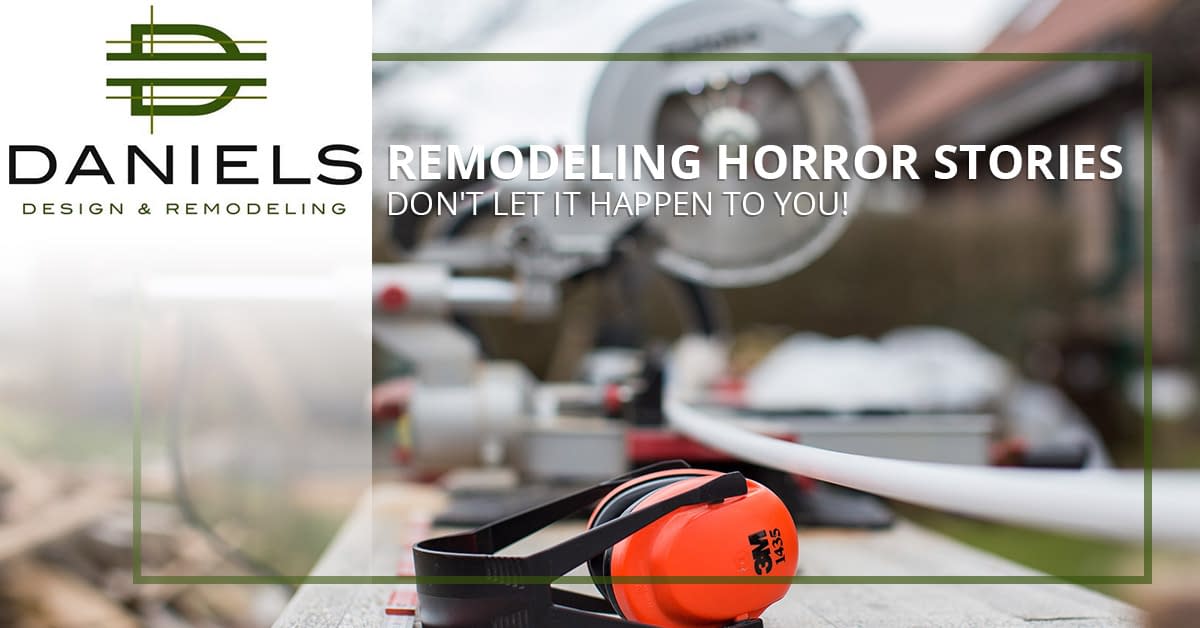 There are so many remodeling horror stories out there!

With Halloween just a few days away, we thought it would be appropriate to go over some of the most blood-curdling, scream-inducing stories of renovations gone wrong. But, through all of the frights and fears, it’s important to know that all of the people in these stories have one very important thing in common: they did not hire the right contractor! Whether they simply chose the cheapest contractor, didn’t do their homework or did it themselves, all of them ended up with horrific remodeling stories, but you can avoid their fate by choosing to work with the professionals at Daniels Design & Remodeling. So without further ado, here are three truly horrific tales of remodeling projects gone wrong:

The Last Bathroom on the Left

One month into her pregnancy, Shannon decided that it was time to finally remodel her and her husband’s master bathroom. They went ahead and demolished it, figuring it would be done in three months — four months tops. Eight months later, Shannon finds herself hobbling her pregnant self upstairs to get to the only functional bathroom left in her home. With a week left before her cesarean section was scheduled, Shannon finally decided it was time to call in a professional to get the job done. Not only was the remodeling project incomplete, but the plumbing was a mess, and she soon realized that the project probably wouldn’t be done by the time she went to the hospital.

When Jeremy and his wife, Karen, found Tim, their remodeling contractor, on Craigslist, they immediately met up with him to sign a contract (some might say they made an oath). They didn’t have a huge budget, and he was willing to work with them. But, from that first meeting, he constantly complained about how he would not make any money from the job. His team worked on their remodeling project, but Tim never showed up to oversee any aspect of the project. They ended up with a result they weren’t happy with and a bill full of extra items and hidden fees.

The Kitchen at the End of the Lane

When John and Millie decided to remodel their kitchen, they didn’t see a need to hire a contractor. Why would they want to pay more when they could just do it themselves? Turns out, they could have used professional help after all. After sending the wrong measurements for the sink and cabinets, they ended up with a sink designed for an RV and cabinets they couldn’t use. Until they could get the right sizes, they were stuck cooking their dinners in a turkey roaster and the microwave, and the bathtub became the hub for washing dishes.

While all these remodeling stories are enough to make anyone think twice about taking on a renovation, they could have all been avoided. Regardless of whether you’re planning a major renovation or a small remodeling project, it’s important to hire the right contractor for the job. Here at Daniels Design & Remodeling, we believe that our remodeling company is the right team for your project in Northern Virginia. Contact us today to get started!